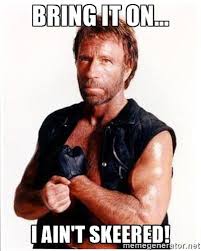 But starting to be concerned. Stacy McCain, Wuhan Virus: Is It Time to Panic Yet?


Honestly, I am not the least bit frightened, but everybody — from the cable news networks to the World Health Organization — seems to be telling me I should be scared out of my mind:


President Donald Trump set out to steady a rattled nation and a diving economy in a solemn Oval Office address, but instead sowed more confusion and doubts that he is up to handling the fast-worsening coronavirus crisis.
Trump spoke to the nation at a fearful moment, when the rhythms of everyday American life are starting to shut down — with schools closing, the NBA suspended, hospitals on high alert and movie icon Tom Hanks saying he and his wife have the disease.
“The virus will not have a chance against us. No nation is more prepared or more resilient than the United States,” the President said, before painting a rosy picture of an economy that is already taking a beating from the virus fallout. The President unveiled several measures to help on that score, to help workers who lack sick pay but have to self-isolate and are hard-hit by shutdowns, though his call for a payroll tax cut is not popular in Congress.
Trump’s big announcement for keeping the virus at bay — what he said was a 30-day ban on travel to the US by Europeans and restrictions on cargo — was immediately engulfed in confusion.
The President later rushed to clarify on Twitter that he was stopping travel and not trans-Atlantic trade in goods, and officials said his plan did not apply to Americans or US permanent residents — though such travelers would face mandatory quarantines.
I like that phrase, “engulfed in confusion” — the media cause confusion, and then pretend to report objectively on the confusion they caused.

Tom Hanks says he and his wife felt sick while traveling in Australia and got tested, just to be safe. Is he now safer for having been tested? No. The way you treat coronavirus is the same way you treat the flu — get lots of rest, stay hydrated, etc. If you caught coronavirus, you might not even realize it. You’d get sick, and then about 72 hours later, you’d get better. It’s not the Black Death. It’s not typhus or cholera or polio.

So even though I am “at risk” — I covered CPAC, where one of the attendees tested positive for coronavirus — I am not panicked. People act as if I’m irresponsible for not being panicked.

“Stop being sarcastic, McCain — this is serious!”

What’s the antonym of “hypochondriac”? Because that’s my attitude. Stress is bad for your immune system, so don’t stress out. Relax. Have another cup of coffee and think about the irony of people who did all the right things — no smoking, no booze, plenty of exercise, a healthy diet — so that they could live to be 80 years old. And then they died because they got a virus from Wuhan, China. Sic transit gloria mundi.

Or imagine you survive, and sue the bastards. . . .

Personally, being retired, and on a steady income, and not living in a dense area, I think we are pretty well set up to avoid the disease, as much as possible in the US. Social distancing is not much of a problem on the beach, and by using as much hygiene as we can remember we might avoid it altogether. Our biggest concern is our daughter-in-law catching it at her waitress job and bringing it home. Virtually everything is closing around us, except retail stuff, and we don't really need to go out and do that

The US, as well as the rest of the world, however is in for a wild ride. I know just enough about viruses, contagion and statistics to be dangerous and know that at this point, we in the US have just barely begun to see the tip of the iceberg. It's going to hurt the economy and social fabric much more than the death toll. Two weeks, or a month from now, we'll know how well all the precautions have helped.
Posted by Fritz at 11:39 AM