So, What Else is New?


Yesterday, we took note of Florida Gov. Ron DeSantis imposing a two-week quarantine on visitors arriving from New York-area airports. New York City is the epicenter of the Chinese Bat Soup Flu pandemic, with more than 17,000 reported cases — including more than 3,000 added in just the past 24 hours. Two states, New York and New Jersey, account for 65% of reported cases. This is a risk to the rest of America:


The White House’s coronavirus response coordinator said Tuesday that anyone who has recently left New York should self-quarantine for 14 days in an effort to slow the spread of the virus in the US.
“To everyone who has left New York over the last few days, because of the rate of the number of cases, you may have been exposed before you left New York,” Dr. Deborah Birx said at a White House press briefing, adding that “everybody who was in New York should be self-quarantining for the next 14 days to ensure that the virus doesn’t spread to others.”
“No matter where they have gone, whether it’s Florida or North Carolina or out to the far reaches of Long Island,” Birx said.

So, this disease that began in Communist China because people eat bats there has now moved to New York and is spreading across America. We’re destroying our economy — spending trillions of dollars for an emergency rescue bill — because of bat-eaters and New Yorkers.

Densely packed, extremely progressive New York City leads the way with many things. Not all are good. 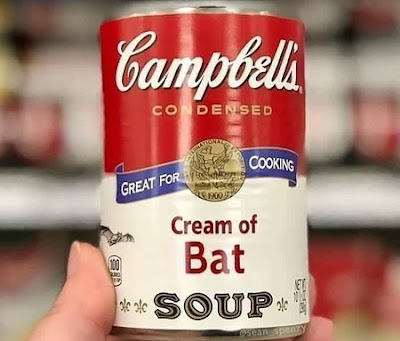 Hat-tip to Kurt Schlicter for giving this pandemic a memorable name. It’s going to get worse — perhaps a whole lot worse — before it gets better, but in the meantime, we can figure out what went wrong, and caution about what’s still going wrong. The first and most important thing President Trump needs to do now is to halt domestic flight departures from New York City-area airports. . .

I gonna stick with WuFlu
Posted by Fritz at 3:33 PM