A Dorchester County fisherman is the new Maryland state record holder for a prehistoric fish.

Samson Matthews, 22, of Hurlock, wasn't seeking anything so spectacular when he went fishing with a friend on Monday.


Matthews was near El Dorado Bridge along Marshyhope Creek looking for blue catfish when he suddenly felt a firm tug on his line, according to a news release from the Maryland Department of Natural Resources.

“I didn’t even know what it was at first,” Matthews said in the release.

Both anglers knew they had a potential record-breaker once they pulled the fish aboard. 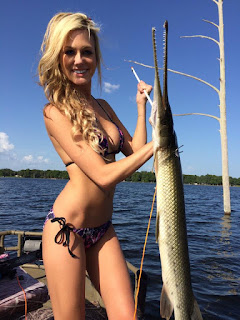 DNR biologists identified the fish as a longnose gar, a fish known for its long nose and hard scales, according to the release.

I've caught exactly one Longnose Gar in my life; it was an accidental catch while I was fishing for Largemouth Bass and Northern Snakeheads on Mattawoman Creek. That trip was documented here, Bass, Snakeheads and Gar, Oh My!

There is a much bigger gar, the Alligator Gar, which lives in the Mississippi Basin, but not Maryland.

The Wombat has Rule 5 Sunday: Joy Harmon up on time at The Other McCain.
Posted by Fritz at 6:44 PM