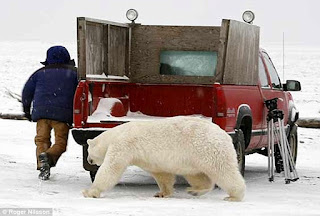 
On Tuesday 17 March 2020, several polar bears were reported in and around the community of St. Anthony on the Northern Peninsula of Newfoundland, adding another threat on top of coronavirus concerns in the province. . . .

There have been no reports of trouble but locals will have to stay vigilant to remain safe, which since 2008 has been a common concern from late winter to early spring. In 2012 in this area, a bear was shot after it destroyed homes and attacked livestock; another bear was shot the next week in the same area. And in 2016 and 2017, a bear had to be shot to protect residents. Bears at this time of year are in hunting mode, which is why my polar bear attack thriller novel, EATEN, is set in March. . . .

I think I'll take my chances with WuFlu, like I have a choice.
Posted by Fritz at 11:37 AM