Russiagate: FISA on the Line

Another vote for scrapping FISA and FISC, "Adam Mill" at Am Great, There Are No Checks and Balances: FISA Must Be Scrapped


"The Foreign Intelligence Surveillance Act is a false idol. If it stopped terrorism or caught bad guys, the spooks who drool over our most intimate data would produce evidence showing that. Yet they don’t.
. . .
It’s an assembly line of constitutional violations. The FBI spied on so many Americans that it had to hire contractors to help with the workload. The FBI failed to keep records on why it conducted warrantless spying on many Americans using these powerful tools. Countless thousands of intimate details flowed through the screens of FBI agents and contractors. Since the FBI doesn’t bother keeping good records on why it spies on Americans, we may never know about the worst abuses. 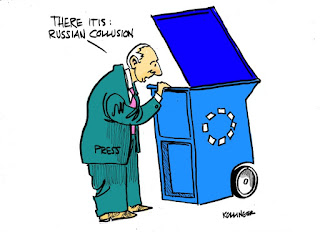 Sundance at CTH produces one of his patented deep dives into FISA et al, in DOJ Political Surveillance – From the IRS in 2011 to the FISA Court in 2016…


I would strongly urge everyone to read the FISC report (full pdf below) because Judge Collyer outlines how the DOJ, which includes the FBI, had an “institutional lack of candor” in responses to the FISA court. Very specifically, the court outlined how the Obama administration was continually lying to the court about both their activity, and the rate of fourth amendment violations for illegal searches and seizures of U.S. persons’ private information. These violations continued for multiple years throughout Obama’s terms.

Unfortunately, due to intelligence terminology Judge Collyer’s brief and ruling is not an easy read for anyone unfamiliar with the FISA processes outlined. The complexity also helps the media avoid discussing, and as a result most Americans have no idea the scale and scope of the issues. So we’ll try to break down the language. . .

But he has some Good News – Doug Collins Says Clean FISA Reauthorization Doesn’t Have Votes – Only Five Days Remain… The FISA part starts at around 3:00.

Also, Devin Nunes Discusses The Fraud Behind The Chris Steele Dossier…. One interesting thing that both he and Sundance are saying is that the purpose of the Steele Dossier was to give the FBI an excuse to investigate Trump. They knew it was bogus from the start, since they, along with the Clinton campaign commissioned it in the first place.

Which is why Christopher Steele Refuses To Cooperate With US Prosecutor Looking Into Origins Of Trump-Russia Probe (Chuck Ross at Da Caller).

This is your daily reminder that Hunter Biden scored a $1.5 BILLION deal with the Chinese government after flying there on Air Force 2

That is on top of his $3.1 million in salary from Burisma

Why isn't the media camped outside of Biden HQ demanding answers? 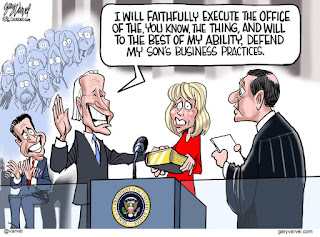 So, of course, Media Suddenly Interested In Running Interference For Hunter Biden Again, from Tristan Justice at Da Fed.

And just another reminder from Da Wire, NOT SORRY: Hillary Retracts Apology For Hiding Secret Email Server. Yeah, we knew that.
Posted by Fritz at 9:51 AM