Do People Seem Dumber Every Year?

Maybe it's evolution: Human intelligence 'peaked thousands of years ago and we've been on an intellectual and emotional decline ever since'

Is the human species doomed to intellectual decline? Will our intelligence ebb away in centuries to come leaving our descendants incapable of using the technology their ancestors invented? In short: will Homo be left without his sapiens?

This is the controversial hypothesis of a leading geneticist who believes that the immense capacity of the human brain to learn new tricks is under attack from an array of genetic mutations that have accumulated since people started living in cities a few thousand years ago.

Professor Gerald Crabtree, who heads a genetics laboratory at Stanford University in California, has put forward the iconoclastic idea that rather than getting cleverer, human intelligence peaked several thousand years ago and from then on there has been a slow decline in our intellectual and emotional abilities...

His argument is based on the fact that for more than 99 per cent of human evolutionary history, we have lived as hunter-gatherer communities surviving on our wits, leading to big-brained humans. Since the invention of agriculture and cities, however, natural selection on our intellect has effective stopped and mutations have accumulated in the critical “intelligence” genes.

“I would wager that if an average citizen from Athens of 1000BC were to appear suddenly among us, he or she would be among the brightest and most intellectually alive of our colleagues and companions, with a good memory, a broad range of ideas and a clear-sighted view of important issues,” Professor Crabtree says in a provocative paper published in the journal Trends in Genetics.

The idea isn't exactly new, but at least he has some numbers to back up the idea:


A comparison of the genomes of parents and children has revealed that on average there are between 25 and 65 new mutations occurring in the DNA of each generation. Professor Crabtree says that this analysis predicts about 5,000 new mutations in the past 120 generations, which covers a span of about 3,000 years.

Some of these mutations, he suggests, will occur within the 2,000 to 5,000 genes that are involved in human intellectual ability, for instance by building and mapping the billions of nerve cells of the brain or producing the dozens of chemical neurotransmitters that control the junctions between these brain cells.

Life as a hunter-gatherer was probably more intellectually demanding than widely supposed, he says. “A hunter-gatherer who did not correctly conceive a solution to providing food or shelter probably died, along with his or her progeny, whereas a modern Wall Street executive that made a similar conceptual mistake would receive a substantial bonus and be a more attractive mate,” Professor Crabtree says.

I think this calls for a cave girl, don't you? 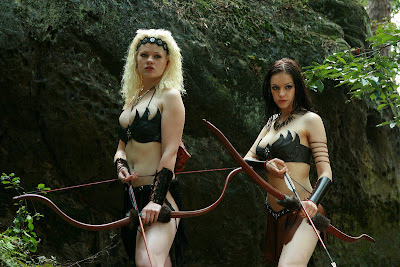 Don't laugh, remember, they're probably smarter than you. Linked by Wombat-Socho at the other McCain in the weekly Rule 5 compendium "Palate Cleanser."