Hunter Kills 104-Pound 'Unusually Large' Coyote
Coyote About 3 Years Old
JEFFERSON CITY, Mo. -- DNA testing has confirmed that a large animal shot and killed by a hunter a month ago was an "unusually large" coyote, the Missouri Department of Conservation announced Monday.

The hunter killed the animal on the opening day of Missouri's November firearms deer season on Nov. 13.

The hunter contacted the MDC, which tested the animal's DNA and determined it was in fact a coyote.

The MDC said the 104-pound coyote was about 3 years old. 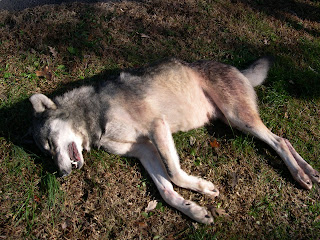 Coyotes were once a considered a  western species, confined largely to the far side of the Mississippi River.  Compared to their cousins the wolves, however, coyotes do very well in the presence of people, eating livestock, pets, and raiding garbage while living very secretly.  For much of the last century they have been invading the lands farther east.  It is reported that eastern coyotes are often larger than western coyotes, having acquired a few stray genes from dogs and even the occasional wolf.  While I have not yet seen a coyote here in Slower Maryland, they have been reported many times, and it would not surprise me at all to see one scavenging on the beach one day.
Posted by Fritz at 7:10 AM