Not today's sunset, alas, which occurs while I commute.  This was the sunset from a catfishing trip to the Potomac River at the end of November. Click to embiggen.


Here is the quarry, the infamous Blue catfish 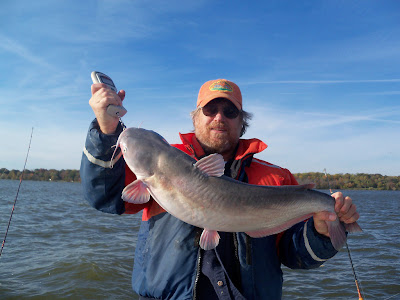 Blue cats are a species which has recently been introduced into the Potomac from elsewhere.  It is considered by many to be an undesirable invasive species, because it is a voracious predator, and out competes the native catfish.  It is also a target for  sports fisherman, and fishing guides.  This trip was part of an informal fishing tournament among a group of friend.  A friend who also runs a guide service hosted the tournament and provided bait, and barbecued ribs and chicken.  This fish came in second place.
Posted by Fritz at 9:45 PM