From Man Who Insulted Muhammad, No Regret

...In his first public comments since his incarceration soon after the video gained international attention in September, Mr. Nakoula told The New York Times that he would go to great lengths to convey what he called “the actual truth” about Muhammad. “I thought, before I wrote this script,” he said, “that I should burn myself in a public square to let the American people and the people of the world know this message that I believe in.”

In explaining his reasons for the film, Mr. Nakoula, 55, a Coptic Christian born in Egypt, cited the 2009 massacre at Fort Hood, Tex., as a prime example of the violence committed “under the sign of Allah.” His anger seemed so intense over the years that even from a federal prison in 2010, he followed the protests against the building of an Islamic center and mosque near ground zero in New York as he continued to work on his movie script. Until now, only the barest details were known about the making of the film that inspired international outrage. 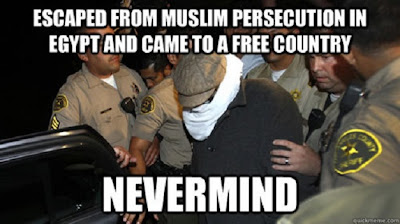 Of course, we know he was ostensibly jailed for violating his parole for unauthorized use of the internet, and/or using an assumed name in the course of making and "marketing", if that's what you can call uploading a video to Youtube, the video that caused the President of the United States to say:


The Future must not belong to those who slander the prophet of Islam.

No word that he supports similar sentiments about Christianity, Buddhism, Animism, Wicca, Zoroastrianism, Seventh Day Absentism (my own sect), or any other ism.

It's also relevant that the administration was  actively trying desperately trying to sell the lie that the attack on the Benghazi consulate that killed four Americans, including Ambassador Stevens, was the outcome of a spontaneous demonstration over the video.  Everybody stops traffic three hours in advance of spontaneous demonstrations, brings along RPGs and mortars, and holds them on propitious anniversaries, all facts well in evidence on the day of the attack.
Posted by Fritz at 7:41 PM