We're a couple days into Ron Klain Joe Biden's first term as President. So how's that going for you? Nick Arama at Red State hears Psaki Slip up on Who Is in Charge at the WH and Twitchy, WHOOPS! Did Jen Psaki say the quiet part out loud with this Freudian slip about the president? Tweets with video at either link. To be fair, she's worked for Obama a lot long than she's worked for Biden. And then, I'm going to have to break my 'no embedded Tweets' rule for this one from Twitchy, It’s amazing that CNN didn’t cut to commercial during this brutally honest assessment of Biden’s first year

From Power Lines Steve Hayward, The Week in Pictures: Bye-Bye Biden Edition. One example at right -> Derek Hunter at Town Hall goes off on The Dumbest Biden 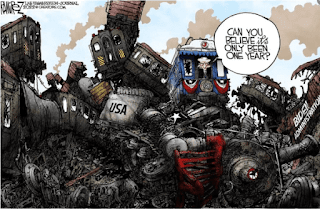 Joe’s story isn’t compelling or even interesting, so he lies about it. It’s a sign of wild insecurity that he lies about his life the way he does – from academic achievements, which he claims but did not have, to the tragic death of his first wife and daughter, which he blamed for years on a drunk driver but simply is not true. Again, there is something deeply wrong with a man who would not only exploit the death of family members, but would also lie in the process.

Then again, as I’ve said many times before, there really isn’t an aspect of his life Joe hasn’t lied about. He’s just always been on the side of the media, so they give him a pass.

Rebecca Downs at Town Hall, This Sloppy Pro-Biden 'Brandon' Ad is So Bad, It's Hard to Tell Who It's Supporting. Embracing the "let's go, Brandon" meme.

Politico, Arizona Democratic Party censures Sinema over voting rights stance. No, it's over her failure to follow the party line to bust the filibuster. At Based Politics, Brad Palumbo notices The Arizona Democratic Party Just Censured Kyrsten Sinema For An ABSURD Reason. They'll be all in on keeping the filibuster after Nov. John McCormack at NR  (cited at Haut Hair) tries to explain Why pro-abortion groups flipped on the filibuster. Just following the party line wherever it takes them. At Vice, ‘People Need to Know She Sucks’: Kyrsten Sinema’s Volunteers, Ex-Staff Are Fed Up. The Wa Free Bee notes a ‘Squad’ Ally Calls Sinema, Manchin ‘White Nationalists’ The should leave the party; the Republicans need another pinko bisexual. David Litt at the Slantic (also cited at Haut Hair) confidently predicts The filibuster is still doomed. I don't think so; it will become a necessary tool again when Democrats need it. The WSJ, also cited at Haut Hair, claims The narrow filibuster vote changed Senate races, starting in 2022. At Fox, Dan Bongino reminds us Democrats bend facts 'to fit whatever narrative they need to keep their power'. To be fair, the problem extends beyond Democrats.

So to recap again, Democrats love the filibuster, then they hate the filibuster. We're all racist for using the filibuster to suppress the minority votes or something like that. But meanwhile, they're going to use the racist filibuster to block sanctions on Vladimir Putin's oil pipeline after canceling our own Keystone pipeline months ago because they claim to care about the environment. Take a breath.

A mother of a student has taken legal action against a school district in Salinas, Calif., over policies she claims allowed two teachers at Buena Vista Middle School to secretly brainwash her teenage daughter into identifying as bisexual, and later as transgender.

Jessica Konen blasted members of the Spreckels Union School District (SUSD) at a board meeting in mid-December, claiming the teachers, who ran a LGBTQ+ club during lunch-hour, “coached” her then sixth-grade daughter to change her gender identity and use a masculine name and pronouns at school.

Her daughter has since switched schools, returned to using her feminine birth name and gender, and seems to be happier, according to her mother—and no longer showing signs of gender dysphoria.

Conn Carroll at WaEx, Twenty-one days to brainwash your child "The parents of Farmington Hills, Michigan (a suburb 25 miles outside of downtown Detroit), were none too pleased to discover recently that their school board was forcing students to take a “21-Day Equity Challenge” as part of the district’s "diversity, equity, and inclusion" curriculum." At Althouse, "Curriculum transparency bills are just thinly veiled attempts at chilling teachers and students from learning and talking about race and gender in schools." (hint, read to comments!) 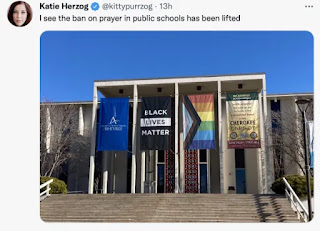 At Insty,  HARSH, BUT FAIR:


Space News! Former NASA administrator Bridenstine endorses candidate in Virginia congressional race. A Republican? But then, STEM has long been a refuge for conservatives.
One of the Bulwark Girlz, Amanda Carpenter at the Orlando Sentinel wants you to see How far will DeSantis go to please the crowd? It's rather amusing how the 'Republicans' at the Bulwark are always opposing the actual Republicans. Follow the money.
Althouse, "The indictment [for seditious conspiracy] describes some Oath Keepers’ belief that 'the federal government has been coopted by a cabal of elites actively trying to strip American citizens of their rights.'"

"That [Stewart Rhodes, the leader and founder of the Oath Keepers], the leading defendant, graduated from one of the country’s most élite law schools, Yale, is more than just a fun fact. He developed his views on the Constitution as a law student eighteen years ago, and won a school prize for the best paper on the Bill of Rights. His paper argued that the Bush Administration’s treatment of 'enemy-combatants' in the war on terror was unconstitutional. Rhodes wrote that 'terrorism is a vague concept,' and that 'we need to follow our Constitution’s narrow definition of war and the enemy.' The argument would have found much support in liberal legal-élite and civil-liberties circles.... [I]n order to convict the defendants of seditious conspiracy, the government will have to prove that they planned their storming of the Capitol with the purpose of opposing the lawful transfer of Presidential power.... Rhodes’s seeming belief that his plan for January 6th was resistance to an unconstitutional process may seem wholly unreasonable.... But, if the case goes to trial... [s]ome jurors may find it difficult to convict Rhodes and others of seditious conspiracy if they find that sincere views about reality informed the defendants’ purpose.... Such an outcome might have the effect of adding legal legitimacy to the big lie.... Now that talk of potential 'civil war' occurs not only among extremist groups but in the mainstream press, a public trial of alleged seditionists will showcase the central fissure that could lead us there."

Writes Jeannie Suk Gersen in "The Case Against the Oath Keepers/Members of the group face seditious-conspiracy charges for their roles in the January 6th insurrection. Can a sincere belief that the election was stolen protect them?" (The New Yorker).

Gersen highlights the risk the government is taking, forcing public attention onto the seditious conspiracy charge: Americans will put effort into understanding the defendants' arguments, some unknown segment of us will agree with them, and many more will think the government has overreached because it cannot prove that they were insincere.

But is the theory that crazy? The Columbia Bugle  @ColumbiaBugle

Tucker Carlson & @joekent16jan19 Call Out @AdamKinzinger &The @January6thCmte's Bizarre Actions & Statements Regarding Ray Epps Tucker: "What is going on here? Clearly they're lying about Ray Epps."

At Bacon's Rebellion, The Rioters Among Us

I’ve not given much attention to the Jan. 6 riot at the U.S. Capitol because this is a Virginia blog, not a blog about Donald Trump and the 2020 presidential election. But maybe I should. Many of the rioters came from Virginia. We have U.S. Capitol rioters among us. How dangerous are these people? Do they, as CNN implies with its “Democracy in Peril” tagline, represent a threat to our democratic republic?

Some truly bad guys might have been involved in the riot. Several members of the right-wing Oath Keepers have been charged with seditious conspiracy. I withhold judgment until I see the evidence presented in court. But none of the Oath Keepers claim Virginia as their home. What about our rioters? Two news stories today give us some clues to the level of danger they pose.

Paralyzed-arm guy. Two Virginia Beach brothers — Eric and Paul Von Bernewitz — have plead guilty to charges of violent entry and disorderly conduct on the Capitol grounds. According to WAVY-TV, Eric wanted to attend the rally for President Donald Trump that day and his brother Paul agreed to go along because he wanted to watch after his brother, who has a paralyzed right arm. They told investigators they got caught up in the excitement of the crowd as they marched to the Capitol after the Trump speech.
. . .
The Jan. 6 riot was a terrible thing. Mob actions are wrong. Rioters should be prosecuted. Anyone conspiring to disrupt the proceedings that certified the November 2020 election result should be punished appropriately. But was this an “insurrection,” an effort to overthrow democracy? Democrats and Republicans alike are spinning this story like mad. Again, I await the prosecution’s presentation of the evidence and the defense’s cross-examination before I draw any conclusions.

But I will say this: when one of the Virginia rioters was a dude with a paralyzed arm, and another was a 48-year-old small-town police officer carrying what might have been a flagpole while pausing to pose for a selfie, I’m thinking that many participants in the event just got carried away. Getting carried away is not a defense. They need to be punished accordingly. But they’re not brown shirts. Democracy is not in peril — not from them.