Again, I am overwhelmed with good links. But first, the overview. Yesterday Slow Joe gave a rambling press conference in which he claimed, among a wild an fanciful field of claims, that if the Senate did not eliminate the filibuster and pass the "Democrats get to cheat" bill, the 2022 midterm elections, which he clearly anticipates, 'might' be illegitimate (If I don't get my way, I was cheated!). An assertation that essentially means all elections prior to the 2020 election, for which we allowed they forced massive concessions for WuFlu, were unfair. The Senate then voted on eliminating the filibuster for that bill and failed.

But first, some foreplay. AllahPundit, at Haut Hair is pleased that Mark Kelly finally walks the plank, says he supports changing the filibuster, which might cost him his election. Guy bBenson at Town Hall hears Schumer: Hell Yes, We're Going to Try and Fail to Nuke the Filibuster Over 'Voting Rights'. Vodka Pundit at PJ Media outs another insurrectionist, Bernie Sis Nina Turner Calls Manchin & Sinema 'Extremists,' Suggests Takin' It to the Streets. Cutie Pavlich at Town Hall notes that Joe Manchin Takes to the Senate Floor...in the Middle of Biden's Press Conference to hold firm. "Let this change happen in this way and the Senate will be a body without rules." AllahPundit whines that Manchin plunges the dagger (again) in floor speech supporting the filibuster, "At least when Sinema knifed them with her own floor speech, she didn’t deliberately counterprogram Biden to do it." Sister Toldja at Red State, Joe Manchin Masterfully Trolls Joe Biden Before Press Conference Is Even Over. Via the Wombat's In The Mailbox: 01.19.22, Louder With Crowder, Joe Manchin Poops All Over Democrat/Media Lies About Voting Rights and Weasel Zippers: CNN Jerkoff Toobin Pushes Kamala For SCOTUS, Hakeem Jeffries – Federal Election Takeover “Inspired by Hugo – Er, Cesar Chavez”, and Sen. Tim Scott Eviscerates Democrats’ “Jim Crow 2.0” Comparison.

After more than a year of combating claims by former President Donald Trump and his allies that the 2020 presidential election was stolen due to rampant fraud and irregularities, Biden stirred up fresh controversy with his rambling response to a reporter asking him to clarify his characterization that red states making reforms to their election protocols poses a threat to democracy.

"Oh, yeah, I think it could easily be illegitimate," Biden said, stumbling through his response. The president then went on a tangent speculating what would have happened after the 2020 election if then-Vice President Mike Pence submitted to pressure by Trump and his allies to try and block electoral votes on the day of the Capitol riot.

When the reporter, RealClearPoltics's Philip Wegmann, formerly of the Washington Examiner, told Biden he meant solely the 2022 election, the president did not back down from his assertion that there could be problems with the midterm elections. Biden turned his focus to the bid by Democrats in the Senate to pass a pair of partisan election overhaul measures that faces long odds with opposition to changing filibuster rules.

From the Wombat's In The Mailbox: 01.19.22, Herr Professor Jacobsen at LI, Biden Says 2022 Election “Could Easily Be Illegitimate” “Oh, yeah, I think it could easily be illegitimate … The increase in the prospect of being illegitimate is in proportion to not being able to get these reforms passed.”Even AllahPundit is concerned, Biden hints at press conference: If Congress doesn't block these state GOP voting reform bills, the midterms are illegitimate; Update: Biden doubles down. Margot Cleveland at Da Fed thinks Biden’s Attack On Voting Rights Far Surpasses Trump’s Election Claims. Matt Margolis at PJ Media, Will the 2022 Midterms Be Legitimate? Joe Biden Says 'It All Depends' on whether he gets his way. Jerry Newcombe at Da Lid says “Free to Vote” Should Not Mean “Free to Cheat and Rig Elections."  WaPoo whines, House GOP "plots" policy agenda for 2022 elections with help from Newt Gingrich. My scare quotes.

Natalia Mittelstadt at JTN found MLK niece Alveda King: Biden 'race baiting, playing the race card' with voting reform rhetoric. At Front Page, Voter ID Requirements Make Sense, "But not to the Democrats." Breitbart notes how the Abortion Industry Threatens to Cut Off Sen. Kyrsten Sinema for Refusal to Support Change in Filibuster Rule, Daneel Olivaw Daniel Oliver, at AM Great wonders Will Democracy Survive a New Year and New Elections? "As a matter of law, no one may go to jail for stealing the election. But as a matter of reality, the people will lose faith in the democratic process."

And Biden? Insty, EVERYTHING IS GOING SWIMMINGLY: Morning Consult: Biden’s below Trump in voters’ first-year report card. "Notably, Trump had almost the entire news media, along with pretty much every other institution in America from the FBI to the FDA, working against him. For Biden’ it’s the reverse and yet he’s still tanking compared to Trump." Ace, Gallup: Biden Falls to Lowest Approval Yet, "Just one point shy of Trump's approval -- and Trump had the media making up Russiagate lies about him. Brandon's been supported and lied for by the media." Rasmussen, 50% of Voters Rate Biden’s First Year ‘Very Unsuccessful’. Matt Margolis, Guess Who Is More Popular Than Joe Biden? Rhymes with "jump." Paul Bedard at WaEx read the tea leaves polls, GOP 2022 ballot lead to 9 points. Insty, ANALYSIS: TRUE. Senator Rand Paul Tells Hugh Hewitt That It Is “Dangerous to the Country” for President Biden To Be Talking in Public. “I Think We Are Stuck With Him Until 2024 [but] It Would Be Good for the Country for Him Not To Speak and Not To Appear in Public.

Insty, WE’VE DESCENDED INTO SOME SORT OF BIZARRE HELL-WORLD IN WHICH PIERS MORGAN IS A VOICE OF SANITY: Piers Morgan Obliterates Joe Biden’s First Year In Office: ‘You’ve Been A Disaster.’ MSNBC’s Scarborough: “Biden Decided...To Govern As A Leftist. It Has Failed Miserably". WaPoo whines After one year in office, what has Biden done about the four crises he pledged to address? Capt. Ed at Haut Hair, Monumental disarray: Woke eats itself, Biden admin edition. Also at Haut Hair John Sexton sees Philip Bump seeing Americans shifting to the right and the left isn't coping very well. Tom Maguire at Just One Minute, Say It Ain't So, Joe. Insty, WELL, TO BE FAIR, IT HAD JOE BIDEN IN IT: Biden’s press conference was an utter disaster. Capt. Ed again, WaPo, again: Dems suddenly worried getting work done ahead of midterms. At WaEx, Byron York looks back at  A year of Democratic control, and it sucked. But not to worry, Bret Stephens at the NYT (cited at Haut Hair) thinks Biden can still rescue his presidency. Twitchy finds Andrew Feinberg who says Biden’s just too articulate for us, who have short attention spans and respond best to memes. CNN whines Biden leaves Democrats hanging as midterms burst into full swing. 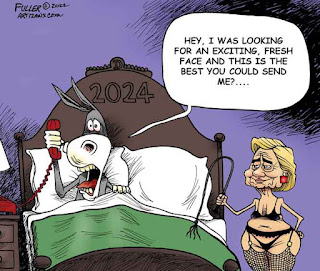 Speaking of the Clinton News Network, NN sees CNN saying ‘Everyone’ Excited by Prospect of Hillary Clinton’s Comeback, "Op-ed claims Clinton is most qualified candidate in 2024." R. Emmett Tyrrell says Keep an Eye on Hillary. Has the woman ever done anything really consequential? Even Kamala Harris has accomplished more. At NewsBusters, LAUGHABLE! The Eight-Least Covered Kamala Harris Blunders.

From the Wombat's In The Mailbox: 01.19.22, Don Surber, Trump vs. DeSantis explained. A reaction to never-vaxxers booing Trump?   Kurt Schlichter considers Trump vs DeSantis and concludes Advantage, DeSantis. But from atop Da Hill, Conservative pundit Ann Coulter says Trump 'is done'. AllahPundit is pissed at Mark Meadows: Ron DeSantis is too smart to challenge the leader of the "party of Trump". From NewsWeek, Republicans Urge Ron DeSantis to Respect Donald Trump: 'It's His Party' At the Floridian? Crist Compares DeSantis to Castro and Maduro, but not Hitler. Personally, as much as I'd like to see Trump victorious again, and begin show trials of Democrats in revenge, I fear he may be damaged goods, and engender too much opposition.

CNBC, Supreme Court rejects Trump request to block release of records to January 6 committee  At Am Think, Only one Supreme Court justice protected Trump's executive privilege from Biden's clutches. Thomas. Who has cause not to like Joe Biden very much. Remember, payback is a bitch!

At Summit News, Dems Plot to Prosecute Trump Over January 6 to Prevent Him Running in 2024, "Although it could backfire." Remember, Kamala cheered on and provided bail to insurrectionists. Paul Bedard at Wa Ex again, Bernstein rips ‘seditious’ Trump and half of nation that backs him. John Green at Am Think thinks The January 6 Narrative is Starting to Unravel. First, it would have to ravel.

Ace, Ray Epps Will Sit For a "More Formal" Chat With the January 6 Committee

"More formal," but still not formal. Oh, remember Kinzinger's claim that he "testified" he had no association with the government?
. . .
Turns out that was an "informal" chat, so he could say anything with no legal consequences. 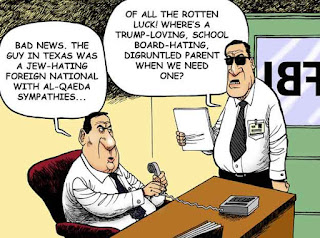 At NYPo, retired FBI leader James Gagliano notes I watched the FBI become so woke it can’t call out terrorism. At JTN, FBI seen taking evidence from Texas Democrat congressman’s home "Agents loaded "large bags, plastic bins, and a computer into a federal vehicle. Others appeared to be logging the items," a reporter said." On one hand, he's a Democrat; on the other hand, he's been a moderate Democrat who criticized Biden. It's too bad we can't trust the FBI, but there it is.

First Street Journal wonders Why Are Capitol Police Arresting Protesters? How dare they arrest lefties protesting for the voting rights for trespassing on the Capitol steps? I didn't think people were allowed that closed these days.

KT at Haut Hair has more on why Widow, sisters of fallen Marine during Afghanistan exit are suing Alec Baldwin for defamation.

Linked at Pirates' Cove in the weekly Sorta Blogless Sunday Pinup and links.