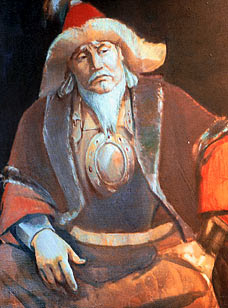 The Mongol invasion that started with Genghis Khan and continued by his sons and relatives removed nearly 700 million tons of carbon from the atmosphere, according to surprising new research. They did this by causing forests to grow where once thriving communities were devoted to growing crops. They did not do this by planting trees. They did it the old fashioned way - by killing people. The Mongol invasion of most of the the rest of the world is estimated to have killed 40 million people, and depopulating large swaths of land, which nature reforested. According to these authors theories, the forests sucked CO2 from the air, and cooled the climate,  and contributed to start of  the Little Ice Age, a long period of colder than average climate world wide lasting form ~1300 to 1870 AD.

I don't really believe this story, as there are no good records for contemporaneous  CO2 decreases in ice core data from that period,  which show a more or less steady value of 280 ppm in the pre-industrial era. Why would the climate respond so strongly to such a non-significant nudge?

Interestingly, Genghis Khan is also thought to be an ancestor of 30 or so million living people, which sort of tends to counteract his work in the environmental field...
Posted by Fritz at 8:51 PM