Did little pterodactyls fly out of their eggs? 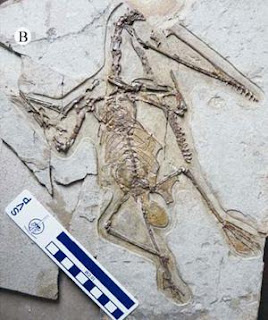 A new fossil pterosaur of a genus Darwinopterus, with an egg between its legs was recently found in China.  The fact that the fossil lacks a crest also suggests sexual dimorphism in these animals, with the male sporting a crest; likely a means of attracting females (they're so easy, if you have a big.... uh, well).

The researchers also suggest that pterosaurs hatched as tiny versions of the adults, with the ability to fly, and fend for themselves, unlike modern birds:


Unwin suggests that pterosaurs, like modern reptiles, may have buried many small eggs in ground where moisture could seep through their parchment-like eggs during incubation, nearly doubling their mass before hatching.

"When pterosaurs hatched, they were tiny versions of adults," Unwin told New Scientist, and "probably" could fly and survive on their own. In contrast, modern birds hatch with undeveloped wings, and require parental care to survive.