TSA Rolls Over For PETA

The Transportation Security Administration is canceling plans to recruit new workers at this year's Iditarod dog race in Alaska after complaints from animal rights activists prompted a media inquiry.

Mushers and their teams of 12 to 16 dogs begin the 1,150-mile race March 5 and are expected to complete the race in 10 to 17 days, according to organizers.

The event draws thousands of fans along the route, and its principal sponsors, including Exxon Mobil, pay $250,000 to fund race operations, according to news reports. Lower-tier sponsors pay $100,000.

In a letter sent this week to Homeland Security Secretary Janet Napolitano, a representative of People for the Ethical Treatment of Animals said the TSA should "stick to keeping our airplanes and railroads safe."

"Forcing dogs to run more than a thousand miles in subzero temperatures is cruel," the letter said..

That's just stupid of TSA to knuckle under to these mindless zealots.  The dogs that run these races have running in their blood to a level that most people can't comprehend.  Every day of the Iditarod, those dogs get up with knowledge that today, they get to run as long and as hard as they want.  If you've ever seen sled dogs getting ready to be harnessed, you'd would have seen them quiver with anticipation. And the Iditarod dogs are the elite of the sled dog world, the canine Lance Armstrongs of poochdom. 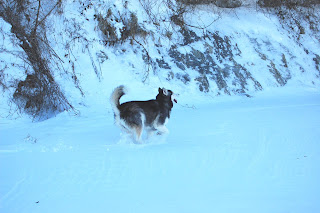 Does this look like a dog that gives a $#!* about the cold?  Does it look like she hates to be brought out and allowed to run?  Imagine this times ten.

The Iditarod celebrates the dog team that brought the diptheria serum to Nome, Alaska:

The most famous event in the history of Alaskan mushing is the 1925 serum run to Nome, also known as the "Great Race of Mercy." A diphtheria epidemic threatened Nome, especially the Inuit children who had no immunity to the "white man's disease", and the nearest quantity of antitoxin was found to be in Anchorage. Since the two available planes were both dismantled and had never been flown in the winter, Governor Scott Bone approved a safer route. The 20-pound (9.1 kg) cylinder of serum was sent by train 298 miles (480 km) from the southern port of SewardNenana, where it was passed just before midnight on January 27 to the first of twenty mushers and more than 100 dogs who relayed the package 674 miles (1,085 km) from Nenana to Nome. The dogs ran in relays, with no dog running over 100 miles (160 km).

The Norwegian Gunnar Kaasen and his lead dog Balto arrived on Front Street in Nome on February 2 at 5:30 a.m., just five and a half days later. The two became media celebrities, and a statue of Balto was erected in Central Park in New York City in 1925, where it has become one of the most popular tourist attractions. However, most mushers consider Leonhard Seppala and his lead dog Togo to be the true heroes of the run. Together they covered the most hazardous stretch of the route, and carried the serum farther than any other team.