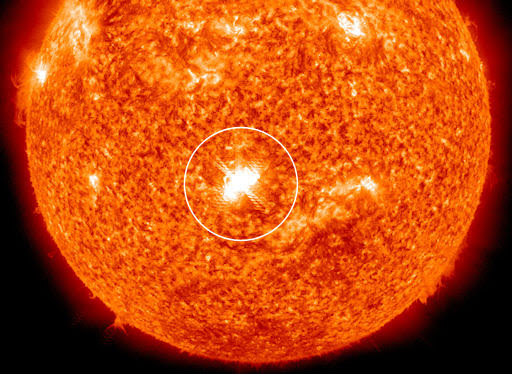 The eruption produced a loud blast of radio waves heard in shortwave receivers around the dayside of our planet. In New Mexico, amateur radio astronomer Thomas Ashcraft recorded these sounds at 19 to 21 MHz. "This was some of the strongest radio bursting of the new solar cycle," he says. "What a great solar day."

Preliminary coronagraph data from STEREO-A and SOHO agree that the explosion produced a fast but not particularly bright coronal mass ejection (CME). The cloud will likely hit Earth's magnetic field on or about Feb. 15th. High-latitude sky watchers should be alert for auroras.

The source of this activity, sunspot 1158 is growing rapidly (48 hour movie). The active region is now more than 100,000 km wide with at least a dozen Earth-sized dark cores scattered beneath its unstable magnetic canopy. More Earth-directed eruptions are likely in the hours ahead.

A British paper has a much more disturbing (or promising, if you like auroras) report:


A huge mass of electrically-charged particles thrown out by a gigantic eruption on the Sun is due to strike the Earth tonight. Scientists expect it to trigger one of the most violent geomagnetic storms ever recorded. The result could be widespread power surges and even blackouts, disrupted TV and mobile phone signals, and broken down communication satellites.

At the same time the Northern Lights, normally confined to polar latitudes, may produce dazzling displays in the skies above southern Britain.

At least one satellite has already been knocked out of action by the storm. Japan's space agency said its Kodama communications satellite had been temporarily shut down after malfunctioning.

I'll stick with Spaceweather's prediction...  but I'm hoping for the auroras.

UPDATE:  The sunspot group responsible for the Feb 13 flare erupted again today with an even larger flare, an X.2 Class aimed at the Earth.  The chance for auroras just went way up!
Posted by Fritz at 6:00 AM