A very long article from National Geographic on the domestication of animals, and dogs in particular.  It covers a lot of ground I've heard before (the Siberian Fox experiment for example), but it also hits some items that I'd never heard of before:


In his own hunt for domestication genes, Andersson is taking a close look at the most populous domesticated animal on Earth: the chicken. Their ancestors, red jungle fowl, roamed freely in the jungles of India, Nepal, and other parts of South and Southeast Asia. Somewhere around 8,000 years ago, humans started breeding them for food. Last year Andersson and his colleagues compared the full genomes of domesticated chickens with those of zoo-based populations of red jungle fowl. They identified a mutation, in a gene known as TSHR, that was found only in domestic populations. The implication is that TSHR thereby played some role in domestication, and now the team is working to determine exactly what the TSHR mutation controls. Andersson hypothesizes that it could play a role in the birds' reproductive cycles, allowing chickens to breed more frequently in captivity than red jungle fowl do in the wild—a trait early farmers would have been eager to perpetuate. The same difference exists between wolves, which reproduce once a year and in the same season, and dogs, which can breed multiple times a year, in any season.

It's easy to see how a gene that regulates pupping to be controlled on a seasonal basis that makes sure pups are born so that they can grow with optimal food supply would be selected against in animals with more stable year-round supply of food.  But this one was the most interesting:


In 2009 UCLA biologist Robert Wayne led a study comparing the wolf and dog genomes. The finding that made headlines was that dogs originated from gray wolves not in East Asia, as other researchers had argued, but in the Middle East. Less noticed by the press was a brief aside in which Wayne and his colleagues identified a particular short DNA sequence, located near a gene called WBSCR17, that was very different in the two species. That region of the genome, they suggested, could be a potential target for "genes that are important in the early domestication of dogs." In humans, the researchers went on to note, WBSCR17 is at least partly responsible for a rare genetic disorder called Williams-Beuren syndrome. Williams-Beuren is characterized by elfin features, a shortened nose bridge, and "exceptional gregariousness"—its sufferers are often overly friendly and trusting of strangers.

After the paper was published, Wayne says, "the number one email we got was from parents of children suffering from Williams-Beuren. They said, Actually our children remind us of dogs in terms of their ability to read behavior and their lack of social barriers in their behavior." The elfin traits also seemed to correspond to aspects of the domestication phenotype. Wayne cautions against making one-to-one parallels between domestication genes and something as genetically complex as Williams-Beuren. The researchers are "intrigued," he says, and hoping to explore the connection further.

Williams-Beuren appears to be caused by a deletion of up to 26 genes.  But evolution could provide a more subtle change in those genes, with one or more being suppressed which lead the the "exceptionally gregariousness" and "overly friendly and trusting of strangers" aspects of Williams-Beuren syndrome.  If your going to have wolves in the house, it's a good thing if they're exceptionally gregarious and overly friendly and trusting of strangers. 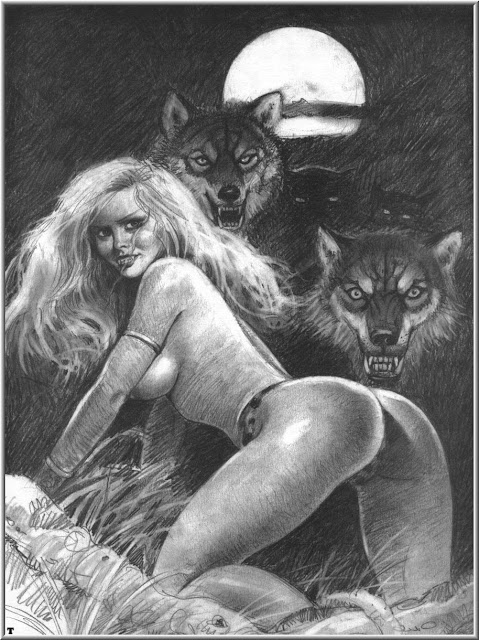