If Lions Have Prides, Cougers have...?

A Passel of Pumas:


DOUGLAS COUNTY — They don’t exactly hunt in packs, don’t travel in herds and aren’t typically thought of as communal beings.

The image of the mountain lion as a stealthy, solitary beast is woven into the fabric of the American West.

And yet there they were on a game trail in Douglas County — eight creatures famous for being loners, all huddled together as if attending some big-cat block party.

Brad Thomas captured the images a few days before Christmas on a trail camera, triggered by a motion sensor, set up on private land.

“The pictures are 100 percent legit,” said Jon Gallie, the assistant district biologist with the Washington Department of Fish and Wildlife in Wenatchee. 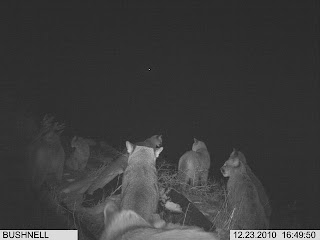 So what were eight cougars doing together (besides having a snack)?

Beyond that, neither Gallie, Koehler, nor other wildlife biologists could say with any certainty what was happening in the pictures.

“We don’t know if this was a chance event, or something they communicated,” Koehler said. “Perhaps it’s like bumping into your neighbor when you go out to get the mail.

“We’re starting to discover that they’re just more social than we once thought,” he continued. “Not like African lions, of course. But they do a lot of communicating.”

“What’s interesting from the landowner’s perspective is, there’s cattle all around there, and no one’s reported a loss. Those cougars are behaving like they should,” Gallie said. There have also been no complaints from people about losing pets, or any concerns about safety, he said.

Aww, that's just cute, they're just staying near Grandma.  But if I were a 90 lb jogger, I would still be nervous.
Posted by Fritz at 7:03 PM