Last week sometime, Georgia said to me "Skye sure is eating a lot. I gave her three cups of food yesterday, and it's already gone. I hope nothing is wrong."  We added that to our list of things to worry about.

Last Saturday morning, as we were getting ready for our getting ready for our walk, I went to put my 'special' pair of old shoes (the ones not good enough for work, but good enough to wear to the beach and get wet).  I picked one up and tilted back to put on, and a handful of dog food was rolling around in it. I mentioned it to Georgia, and grabbed the next shoe.  It, too, had kibble in it.  I told Georgia, and she realized at once there must be a mouse in the house.  We have had them in the past, and they often move a pile of dog food into some obscure location for later consumption (one really huge pile ended up under our stove once).  So, on Saturday afternoon we stopped at Wally World and got pair of new, fancy mid-tech mouse traps. We baited them with peanuut butter, and set one by the dog bowl and one by the refrigerator.  In the morning, the one by the dog food bowl was occupied by Dead Stewart...

Anyway, I ordinarily I wouldn't bring anything this ordinary to the blog, but then today I ran across this, and realized what an opportunity we'd missed.. 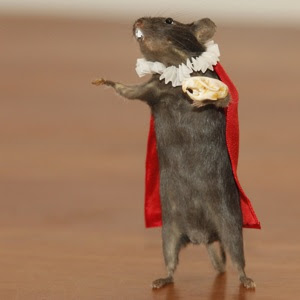 A bizarre Victorian hobby that transforms dead mice into miniature "humans" is getting its revival in -- where else -- hipster Brooklyn.

A Gowanus gallery offering a $45 class in "anthropomorphic taxidermy" today sold out in four hours.

For inspiration, the gallery will have a punk-rocker mouse with green hair and a Hamlet mouse cloaked in a cape on hand for the class.

They look like sculptures, but the figurines were once living, breathing, scurrying rodents.

"It looks less like an animal and more like a weird art project," said Susan Jeiven, 39, a tattoo artist and taxidermist who'll teach the class at Observatory art space...

...Jeiven is a purist, so her mice will be dressed in Victorian bloomers and vintage doll clothing.

"I don't like rogue taxidermy. I want them to look classy," she said.

Well, where there's one mouse there's likely to be a bunch.  We'll keep the traps set, and maybe we'll have enough to make a little diorama...
Posted by Fritz at 7:12 PM

Email ThisBlogThis!Share to TwitterShare to FacebookShare to Pinterest
Labels: Me, whimsy