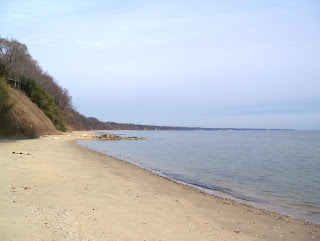 We started off with our usual beach walk. Pretty nice, not much wind, but a little cool, but otherwise unremarkable. 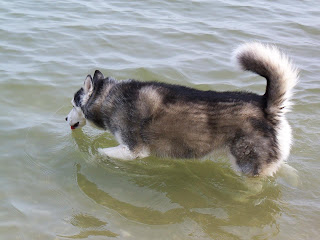 Skye has never been a big swimmer (she knows how, but we've only seen her swim once, and that was from necessity, not desire).  My interpretation is that it's usually bad news when a sled dog has to swim, and that they try to avoid it.  I think she looks down on the silly labs that do it for fun. 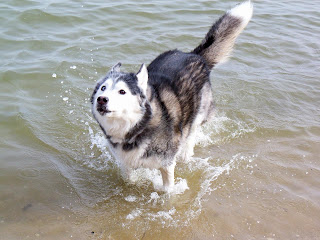 But she will wade in until half her body is immersed.

A little wade seems to leave her reinvigorated.


I spotted this incipient "Ivy Monster" on the way home.  Funny, I've walked by many times, and never had it catch my eye before.

On the way to and from the beach we drove past the slip where I keep my boat.  I had made arrangements with the Marina to put the boat in this week, after some minor work.  Later in the afternoon, I loaded the car with stuff for the boat, including the canopy, and drove down to start getting it ready for fishing.

As I stepped on the boat, water rose up on my feet, and I realized the bilge was full of water, and the boat was in the process of sinking...  I hit the bilge pump switch, but got no response.

I managed to find Blake, the young man (and a long time friend of my sons) who works there, and he rigged a pump, and we pumped it out.  We quickly saw that the water was coming in though a hole in the transom where the cable for the depth finders transducer cable went through.  He poled it over to the lift, and lifted the boat.  After we de-watered it again, we determined that the bilge pump float switch had failed, allowing the bilge to fill with bay water.  Once the bay water covered the battery terminals, electrolysis rapidly destroyed the positive terminal, and cut power to the motor.

So, I guess this week, Blake is going to work on a better solution to patching the transducer cable hole than a big wad of 5200.  I'll work on getting a new bilge pump installed.  Maybe it will be ready again by next week end.
Posted by Fritz at 9:24 AM