DNA analysis has shown that the Egyptian jackal, previously categorized as a subspecies of the golden jackal, is a relative of the grey wolf. 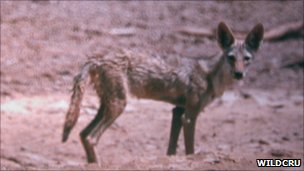 DNA analysis shows that a large jackal like animal living in Africa is more closely related to the gray wolf, the "common", European, Asian and American wolf.


Genetic information shows that the species, Canis aureus lupaster, is more closely related to Indian and Himalayan wolves than golden jackals. Writing in Plos One, researchers said the renamed "African wolf" was the only grey wolf species found in Africa. They also called for an urgent assessment of its conservation status.

There has been a long-running debate over whether the animal was a jackal or wolf. In the late 19th Century, the renowned evolutionary biologist Thomas Huxley said that it looked suspiciously like grey wolves (Canis lupus). In the 20th Century, other biologists made similar comments after examining skulls from specimens of the species. However, the taxonomical classification remained unchanged.

It's interesting that something this large is so relatively unknown.  Kind of like the recent proposal to reclassify of African elephants into two species.
Posted by Fritz at 6:00 AM