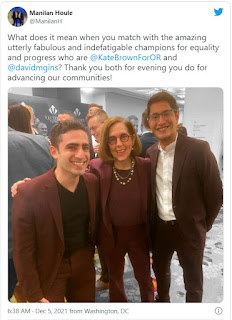 
Democratic Oregon Governor Kate Brown was spotted maskless at a gala event in Washington D.C., even as she pushes for permanent mask mandates in her state.

Brown was a “featured guest” at the LGBTQ Victory Fund‘s 30th Anniversary Gala in Washington D.C. on Saturday. Brown was also one of four “LGBTQ Victory Hall of Fame Inductees” from the pro-LGBT PAC.

A Twitter user posted a photo of himself standing with Brown and David Gins, Deputy Director of Operations for Vice President Kamala Harris.

“What does it mean when you match with the amazingutterly fabulous and indefatigable champions for equality and progress who are @KateBrownForORand @davidmgins? Thank you both for evening you do for advancing our communities!” the user wrote.

Another user posted a photo that purportedly shows the convention hall where the event took place, with several hundred people in the room without masks.

The gala was held at the Marriot Marquis at in Washington, D.C. At this point, Washington D.C. has no comprehensive indoor mask mandate. But:

Masks will still be required, regardless of vaccination status, in the following circumstances:

I would argue a hotel gala would count as congregate facility.

Masks for the peons, but not for the elites.

Linked as Blog of the Day at Pirate's Cove in the daily If All You See….