At the midterms, MSM and political activists interest in the Russiagate affairs had dwindled to a few articles a day, but now, with the forced resignation of Jeff Sessions as AG and the ascension of Matt Whitaker  to the post as Acting AG, we have a renewal of interest in the issues.

Ann Altouse remembers when Lindsey Graham said "If Sessions is fired, there will be holy hell to pay. Any effort to go after Mueller will be the beginning of the end of the Trump presidency." back in July 2017. But a lot has changed in a year.

Debra Heine at PJ Media catches Soros-Funded MoveOn.Org Plans Mass Demonstrations Thursday to Protest Sessions' Firing.  Mark Levin blows up Democrat ‘constitutional crisis’ fearmongering over Mueller probe. Since Mueller's is not a Constitutionally required office, it can't be a constitutional crisis regardless of how much they whine.


“I think the grand jury makeup is concerning based on where they called this grand jury,” Whitaker said in an Aug. 11, 2017, interview on SiriusXM Patriot’s “David Webb Show.”

Whitaker, who was executive director at the time for a think tank called the Foundation for Accountability and Civic Trust (FACT), was referring to grand juries empaneled in northern Virginia and Washington, D.C. (RELATED: Who Is Matthew Whitaker?)

Whitaker said voters in the Virginia district were “typically Democrat” while the grand jury in D.C. was drawn from a “96 percent Hillary Clinton voter area.”

“They’re pulling from those voters and those neighborhoods and those communities, and so those members of those grand juries could have a bias against this president,” said Whitaker, who is now overseeing the Mueller investigation after Jeff Sessions resigned as attorney general Wednesday.

There's a movement out there claiming the Whitaker's appointment is illegal due to a law requiring acting appointments to have been from a pool of people already confirmed by the Senate for other positions. John Yoo: Whitaker’s Appointment As Acting Attorney General Is Unconstitutional.   Kellyanne Conway’s Husband (George) Writes Scathing Op-Ed Saying Trump’s Interim AG Pick Is ‘Illegal’ (Law and Crime).


Their argument is based on the idea that the Attorney General is a “principal officer,” and therefore must be confirmed by the Senate. The authors, both of whom are attorneys, claim that not only is Whitaker’s appointment improper, but anything that he does in the role is also by definition improper.

“President Trump’s installation of Matthew Whitaker as acting attorney general of the United States after forcing the resignation of Jeff Sessions is unconstitutional,” they wrote. “It’s illegal. And it means that anything Mr. Whitaker does, or tries to do, in that position is invalid.”

In his new role, Whitaker’s responsibilities include overseeing Mueller’s investigation. That job formerly belonged to Deputy Attorney General Rod Rosenstein because now-former AG Jeff Sessions had recused himself. With Sessions out, his replacement takes over.

The argument against Conway and Katyal, as pointed out by University of Texas Law Professor Steve Vladeck, is that Whitaker has not been named as Sessions’ permanent replacement, merely the interim AG until someone else is selected and confirmed. The Vacancies Act gives the president some flexibility in choosing a temporary replacement. Still, Vladeck noted, the fact that a counterargument is being made here indicates Democrats could very well try to fight this anyway.

I disagree with @neal_katyal & @gtconway3d (to my mind, temporary “assignments” to offices aren’t the same thing as formal “appointments” for purposes of the Appointments Clause), but this is an important read and something that’s sure to be litigated:https://t.co/Ba5WvdF48X
— Steve Vladeck (@steve_vladeck) November 8, 2018

Well, bring on Janice Rogers Brown then. I haven’t had time to really think about this, but my initial impression is that Yoo is right. On the other hand, we don’t want the Constitution to be a dead letter — it must grow and change with the times, and perhaps the times demand that we be more . . . flexible and pragmatic about appointments. Yeah, that’s it. Flexible and pragmatic. And modern!

UPDATE: Andrew McCarthy says Yoo is wrong: “Matthew Whitaker joined the Trump Justice Department as Sessions’s chief of staff in October 2017. The date is relevant. The president has named him as acting attorney general under the Vacancies Reform Act of 1998 (the relevant provisions are codified at Sections 3345 and 3346 of Title 5, U.S. Code). There has been some commentary suggesting that because Whitaker was in a job (chief of staff) that did not require Senate confirmation, he could not become the “acting officer” in a position (AG) that calls for Senate confirmation. Not so. The Vacancies Act enables the president to name an acting officer, who may serve as such for 210 days, as long as the person named has been working at the agency or department for at least 90 days in a fairly high-ranking position. Whitaker qualifies.”

That would be the Clinton-Era Vacancies Reform Act.


Quoth Whitaker: ”James Comey, the Director of the FBI, stood up and talked about the emails and the emailing of classified information. That was serious, but the real ballgame is the situation you’re describing, and that is where Clinton Foundation donors were given preferential treatment, by Hillary Clinton’s State Department.”

“It’s very interesting,” he said, “to watch the Clinton camp try to explain away these meetings. But, like you said, 50 percent of the meetings she took with people that were not essentially employees or representatives of countries or the like, just sort of individuals that wanted to meet with the Secretary of State, 50 percent of those — as the AP has reported more than 50 percent — were Clinton Foundation donors.

“It is not possible for them to explain away that Clinton Foundation donors were given preferential treatment when it came to seeing the Secretary of State. It’s just the way business was done,” Whitaker declared. “The frustrating thing for me continues to be, she had the private email server to avoid public disclosure of her emails. She didn’t turn over any emails until two years after she was supposed to, in 2012, from the illegal server. And yet, we are now almost four years since she finished serving, and we’re still gonna see another 15,000 — what the State Department is calling ‘documents,’ and that’s a very interesting term to me, so I think there’s more to it than just the emails.”

“And then Judicial Watch continues to have their litigation with the State Department, and we continue to have revelations of more emails, that are really, quite frankly, more concerning than the initial flood that we got, that dripped out over the past year as part of the Benghazi investigation,” he said. “This is kind of a big deal, and my group, the Foundation for Accountability and Civic Trust, has been pressing hard on the State Department to try to get to the bottom of this, together with groups like Judicial Watch.”

With the 2016 presidential election approaching, Whitaker said that then President Obama “has given a full-throated endorsement of Hillary Clinton. Hillary Clinton has also said that she would more than likely keep on the Attorney General, Loretta Lynch, in that position,” he noted. “Don’t forget the tarmac meeting, for half an hour, that preceded all of these things being swept under the rug, the FBI director deciding that he was the judge, jury, and executioner in giving Hillary Clinton, essentially, an FBI pardon.” “We need somebody that is independent to look at these facts,” he stated. ”Based on what I’ve seen, that’s in the public domain currently, I think there’s enough to have a special prosecutor that can look into this, that can have the ability to subpoena documents and interview witnesses and do the kind of things and have the independence separate from this [Obama] administration.”

He called for then Attorney General Loretta Lynch to appoint a special counsel to investigate Clinton and the Clinton Foundation. Whitaker added, “I’ve always thought the Clinton Foundation is a very sophisticated way to get around the campaign finance laws and to allow for unlimited donations and an ability to curry favor with a presidential candidate that, quite frankly, is unprecedented in the history of our country — where they can take more than the $2,700 that’s the limit on individuals and use it for sort of whatever they want; that’s plausible within the charitable contribution laws.”

I can see why he scares the shit out of the Democrats.

CNN: Trump reviewing his answers to Mueller as he changes who oversees the Russia investigation. AP: Indictments? Final report? White House braces for Mueller. I'd love to be a fly on the wall in the first meeting between Mueller and Whitaker.  Reuters: U.S. court case tests Special Counsel Mueller's power, status


A U.S. Justice Department attorney on Thursday spelled out the circumstances under which Special Counsel Robert Mueller could be fired in a court case that took on new significance this week after President Donald Trump ousted his attorney general.

The case, argued on Mueller’s behalf by Deputy Solicitor General Michael Dreeben who is working temporarily on assignment in Mueller’s office, started months ago as a challenge to the legality of Mueller’s appointment and his authority.

In May, Andrew Miller, who is an associate of long-time Trump adviser Roger Stone, refused to comply with a grand jury subpoena from Mueller. Miller was held in civil contempt. He filed a legal challenge, asserting Mueller has no authority to compel his testimony or to oversee the probe because he was illegally appointed.
. . .
Dreeben told a three-judge appeals panel on Thursday that there are checks and balances on Mueller’s activities that make his appointment lawful. One of these is that he could be fired by Whitaker, now acting attorney general, if Whitaker revoked department regulations governing Mueller’s appointment to make him fireable without cause.

The special counsel is not “off in a free-floating environment,” Dreeben said in arguments before the U.S. Court of Appeals for the District of Columbia Circuit that attempted to show Mueller’s power is circumscribed by the law.

Seems like an issue that should have been settled some time ago. Certainly the Democrats have argued that Mueller should be effectively without supervision. 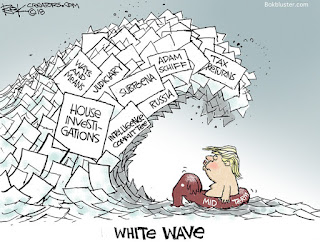 In a preview of things to come, Incoming Democrat Chairman Jerrold Nadler: Dems Will Go ‘All-In’ On Russia, Impeach Kavanaugh For ‘Perjury’ (Mollie Hemingway at Da Federalist). Adam Schiff: Democrats Will Resume the 'Oversight Role' Republicans 'So Completely Abdicated' (Susan Jones CNSNews) I may have to resume watching C-Span for the comedic value.

Chuck Ross at Da Caller: Trump Opens Door To Declassifying Russia Docs, And His Acting Attorney General Could Be On Board. Now that Rosenstein is out of the loop. I wonder if he'll resign?


Trump announced on Sept. 17 that he was ordering the Justice Department and Office of the Director of National Intelligence to begin the process of declassifying 21 pages from an FBI application for a surveillance warrant against former Trump campaign adviser Carter Page.

Trump also called for the declassification of FBI notes from interviews used to obtain the surveillance warrant. He also urged the release of FBI interviews with Bruce Ohr, the Justice Department official who serve as a back channel to Christopher Steele, the author of the Democrat-funded dossier. The FBI relied heavily on the unverified dossier to obtain the spy warrants on Page.

Trump faced heavy backlash from his declassification push. Democrats accused him of meddling with the special counsel’s investigation and of putting confidential FBI sources at risk.

But Trump suggested Wednesday that with the midterms behind him, he is against considering declassification. “It’s amazing how people on the other side just don’t want those documents declassified,” Trump said in his press conference.

Refering to the interview Dan Bongino had with George Papadopoulos that I posted the other day,
Mark Wauck at the American Thinker wonders Could Papadopoulos Blow the Russia Hoax Wide Open? One can only hope. It's pretty clear he was badly used by a variety of US intelligence agencies in an attempt to get to Trump.
Posted by Fritz at 12:07 PM