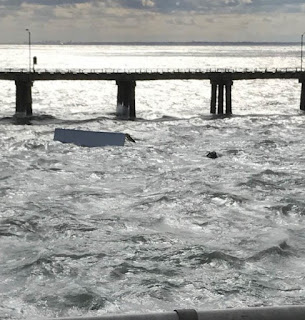 The driver of a tractor-trailer that went over the side of the Chesapeake Bay Bridge-Tunnel (CBBT) Thursday afternoon has died. CBBT spokesman Tom Anderson confirmed the driver died when he was on the way to the hospital.

Authorities identified the driver as 47-year-old Joseph Chen, of Greenville, North Carolina. Chen was hauling a load of seafood for Evans Transports, which is based out of Washington, North Carolina.

The tractor-trailer went into the water on the southbound side of the CBBT at mile marker 15 around 12:30 p.m. Navy spokesman Cmdr. Dave Hecht said a crew with HSE 2 out of Norfolk was in the area training when police called for help.

That crew responded in an MH-60 Sierra and pulled the driver out of the water. WAVY’s Erin Kelly tweeted that officials said the driver was standing on top of the vehicle before he was hoisted into the helicopter.
. . .
Bridge officials issued Level 2 wind restrictions Thursday, with winds exceeding 47 mph. There was a Level 1 restriction at the time of the accident.

Under a Level 2 restriction, tractor-trailers must be hauling a gross payload of 30,000 pounds, in addition to the weight of the rig.