Discussion of the Halbig and the 4th Circuit Court's competing decisions on subsidies for the federal exchanges continues:

Earlier this week, a three-judge panel in the D.C. Circuit Court ruled that, contrary to the Obama administration’s implementation and an Internal Revenue Service rule, Obamacare’s subsidies for private health insurance were limited to state-run health exchanges. The reasoning for this ruling was simple: That’s what the law says. The section dealing with the creation of state exchanges and the provision of subsidies states, quite clearly, that subsidies are only available in exchanges "established by a State," which the law expressly defines as the 50 states plus the District of Columbia.

Obamacare’s defenders have responded by saying that this is obviously ridiculous. It doesn’t make any sense in the larger context of the law, and what’s more, no one who supported the law or voted for it ever talked about this. It’s a theory concocted entirely by the law’s opponents, the health law's backers argue, and never once mentioned by people who crafted or backed the law.
. . . 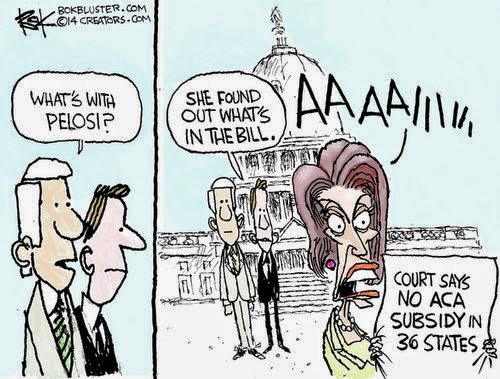 Jonathan Gruber, a Massachusetts Institute of Technology economist who helped design the Massachusetts health law that was the model for Obamacare, was a key influence on the creation of the federal health law. He was widely quoted in the media. During the crafting of the law, the Obama administration brought him on for consultation because of his expertise. He was paid almost $400,000 to consult with the administration on the law. And he has claimed to have written part of the legislation, the section dealing with small business tax credits.

After the law passed, in 2011 and throughout 2012, multiple states sought his expertise to help them understand their options regarding the choice to set up their own exchanges. During that period of time, in January of 2012, Gruber told an audience at Noblis, a technical management support organization, that tax credits—the subsidies available for health insurance—were only available in states that set up their own exchanges. . .
Here’s the video, which according to YouTube's date stamp was uploaded by Noblis on January 20, 2012. The relevant passage starts around minute 31.

And now on to the present day: 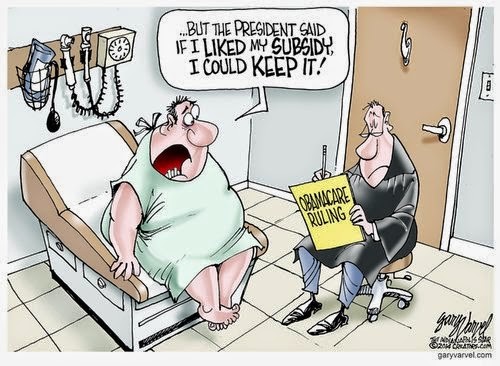 Why the DC Circuit’s interpretation of the ACA in Halbig v. Burwell is far from “absurd”


. . .Today, few liberals would say that any of the supposed benefits of federal-state cooperation are worth the potential cost of having many states where Obamacare tax credits are unavailable. But back in 2010, most ACA supporters expected that the law would be much more popular and more effective than has actually turned out to be the case. They thus expected that most states would set up their own exchanges. States that initially refused would eventually fall into line, as the ACA became even more popular and their citizens, insurers, and health care providers all suffered financial losses due to the states’ recalcitrance.

Such expectations were far from completely unreasonable. But, so far at least, things have not gone the way ACA supporters hoped. Only 14 states have fully established exchanges. Due to the law’s numerous flaws and continuing unpopularity, the ACA’s scheme of cooperative federalism has turned into a prime example of what Jessica Bulman-Pozen and Heather Gerken call “uncooperative federalism”: when state governments are given a major role in a federal program they oppose, they can sometimes undermine it by refusing to play ball.

This state of affairs is not what ACA supporters wanted. But that doesn’t change the reality that the cooperative federalism approach reflected in the text of the statute and the DC Circuit opinion is neither nonsensical nor absurd. Indeed, if things had gone according to plan, many of those who today decry Halbig would be hailing the ACA’s reliance on state-run exchanges as a shining example of cooperative federalism in action.

I recognize, of course, that the “absurdity” issue is not the only legal argument against the result in Halbig. But the absurdity claim is often put forward by critics of the decision, and has become an important part of the debate over the ruling. . . .

It certainly seems like the people who wrote the law were trying to coerce the states into buying in. But that failed, so now they're back to the "drafting error" and "absurd result" defenses. One court bought it, the other didn't.
Posted by Fritz at 9:22 AM