Don't You Dare Make Fun of the Supreme Leader 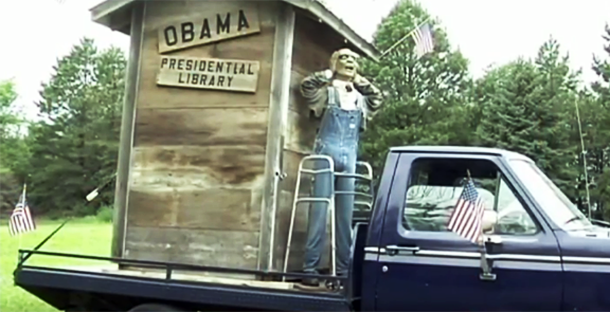 The U.S. Department of Justice has sent a member of its Community Relations Service team to investigate a Nebraska parade float that criticized President Obama.

A Fourth of July parade float featured at the annual Independence Day parade in Norfolk sparked criticism when it depicted a zombie-like figure resembling Mr. Obama standing outside an outhouse, which was labeled the “Obama Presidential Library.”
. . .
The float’s creator, Dale Remmich, has said the mannequin depicted himself, not President Obama. He said he is upset with the president’s handling of the Veterans Affairs Department, the World-Herald reported.

This is a complete and total abuse of federal power. Assuming, for a moment that despite the makers protestations to the contrary, that this was motivated by racial animus, it's still just a childish prank and not an act that harmed anyone or anything other than the Preznit's dignity inflated sense of self worth. It is not a federal crime, it's protected free speech, and the DOJ should be ashamed to be interfering. Someone should lose their job; preferably Eric Holder.

Spreaking of Eric Holder, of course, he's back in the news claiming that opposition to his and Preznit Obama's plans for the country is motivated by racism.

Of course he does; he's much to political and small minded to acknowledge that opposition to any of his work could be based on good faith belief that their policies are bad for the country.
Posted by Fritz at 9:27 AM