Life after Chernobyl: Sergei Gaschak’s photography from inside 'the zone'


Sergei Gaschak’s photography offers an unparalleled glimpse at animal life inside “the zone”, the area of Ukraine and Belarus that has been officially closed off to human habitation since the Chernobyl nuclear catastrophe of 1986. Using camera traps to take photographs mechanically, as well as taking photographs personally, Gaschak has captured what few have been able to see with their own eyes – the remarkable diversity of wildlife within the zone.

One of the first rescuers on the site of the nuclear disaster, Gaschak has devoted recent years to photographing lynxes, otters, owls and other wildlife, and has even discovered the footprints of brown bears. The exclusion zone stretches for miles around the site of the reactor, and includes Pripyat, which was once a thriving Soviet town of 50,000 inhabitants but has remained a ghost town since the disaster, a time warp of perestroika-era Soviet life. 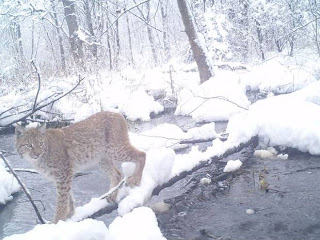 More than 300,000 people evacuated the region in the aftermath of the explosion, and only a few hundred stubborn pensioners have returned, defying government bans on settlement inside the zone.

At the time of the disaster, there were few wild animals living in the region around the nuclear plant. But as the humans moved out in the wake of the catastrophe, large mammals appeared and thrived. While the animals showed incredibly high levels of radiation, they still looked normal. There were no giant wolves or three-headed deer.

According to a book on animal and plant life in the zone, A Natural History of Chernobyl, the only abnormalities found in animals has been albino spots and deformities in barn swallows.

Organisms are actually pretty good at dealing with moderate levels of radiation, having evolved for a billion years or so, bathed in a light dose continually. You and I might not wish to hazard the fairly slight additional risk of cancer that one would face in "the zone", but wildlife have no such prejudices; they thrive where the food is and people are not.

One would think that Sierra Club et al. would all over creating such refuges all over the world.
Posted by Fritz at 10:47 PM